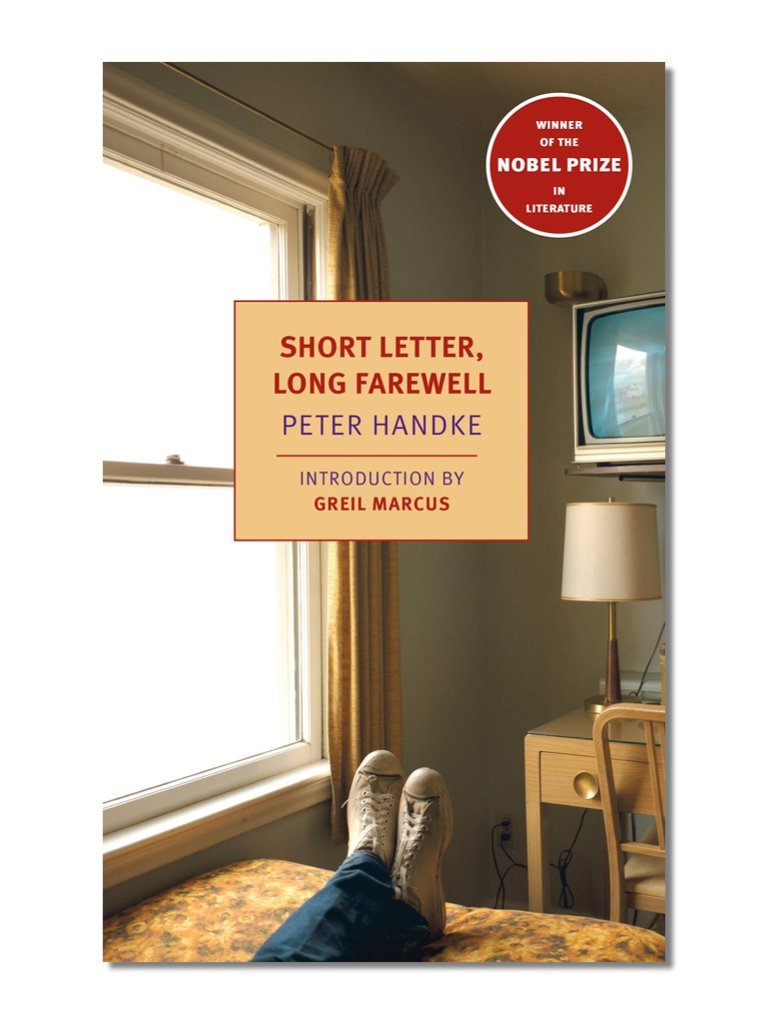 Austrian writer Peter Handke’s novel “Short Letter, Long Farewell” was first published in German in 1972. It contains a short travelogue about a young Austrian writer visiting the United States in search of his separated wife. The charm of this short novel, featuring real characters such as film director John Ford, is not only that it is a novel that won the 2019 Nobel Prize, but also that the various stories, which unfold in a rather short book, live with the reader’s breath. The novel is not a gigantic travelogue that is commonly featured in fantasy novels, but is a journey of an extremely ordinary artist, narrating calmly about a “Long Farewell”.

The story of an old lover who shared a long life journey is constantly confronted with hatred, affection, and bitter wounds. The stories of himself and his lover, who have changed so much with time about how they look at a different path, naturally flow in harmony with the atmosphere and background of various cities in the United States, buildings of the city, and the appearance of the people in the city. The first chapter of the book is “Short Letter”. The protagonist’s journey starts with a short letter from his separated wife, Judith, that tells him not to find her. Then, the second paragraph is named “Long Farewell”.

I savoured the English-translated version of the book for 6 whole months. The novel is very short that it is embarrassing to say that I have read this book for six months. Why did the novel win the Nobel Prize, one of the most prestigious awards in literature, despite the clichés of lovers from all over the world, the separation of lovers, the divorce of couples, and the nostalgia of lovers who have become strangers? What would have been so appealing about this novel? I think that the true “authors” are ordinary people who portray ordinary life stories that anyone can face at least once in their lives. Perhaps my personal preferences and standards have made this book more enjoyable, but it is certainly interesting to think about the power the novel has.

First of all, the unique expression of Peter Handke that makes objects and characters live alive allows the readers to identify the main character’s personality through his monologues and the words spoken to the characters around him. In the bathtub, the protagonist analyzes The Great Gatsby of F.S. Fitzgerald, a prominent American novelist, and observes American’s culture and Americans from the perspective of an Austrian (European), conveying his viewpoint to the audience through a monologue. Rather than describing any situation or characters, the story unfolds via the main character’s thought changes, emotions, and recalls to the past. Probably, the greatest strength of this novel may be the detailed description of the change of consciousness of the protagonist.

Not only the detailed description but how the novel lingers even after closing the book also may be a factor that intensifies this book. It feels like a mixture of Japanese movies with clam flows, French movies with freedom, and German movies that are slightly boring but clear–there aren’t many novels that feel like movies. While the movie is a feast of dialogues (language) and visual effects, the novel is composed entirely of the text, that I think if it can leave a clear imagination and afterimages from those imaginations, then the novel can be considered as one of the great novels. Consequently, I think this book is one of the great novels. As mentioned earlier, the author’s talent and efforts to make the novel breathe with readers and to create a special story from mundane topics seem to contribute to making the novel memorable.

It was a meaningful time to contemplate the “break up” that can be commonly seen in various forms around the world. The farewell this novel describes is neither so dramatic nor so sad. Perhaps, I think the author has expressed the cool and futile nature of break up very well. I am not sure how well the Korean translation is, but I recommend the English translation that is written in an easy style. During this cold winter where we have to stay home due to the pandemic, what about we get soaked in the appreciation, facing the lonely landscape of America through Peter Handke’s novel?