"The meaning of a book cannot be found within that book; rather meaning comes from the myriad relationships that a book has with other books. To grasp the tenor of the relationships books have with each other, you must take a horizontal approach, instead of one of depth. This is because the only breadth can construct context … Reading in context is a reading incomplete, reading in the middle and a reading in surplus that always leaves behind something important [cannot understand this sentence; isn't context supposed to provide meaning? So why would context lead to incompleteness?]."

In 'The Value of Reading', the first chapter of Kim's book, Kim describes the method and value of "reading". He explains the concept of "intertext": that all texts in the world are entangled and cannot be understood without each other.

The process of understanding a work of art is similar because, in order to fully understand the concept behind some artwork, it is necessary to understand texts written by the artist, curators, and critics. And these texts, for sure, are related to the other texts around us. These texts naturally touch on art history, but understanding the references in this history requires understanding a broad array of texts in not only history, but also sociology, philosophy, and literature. In this way, contemporary art can be viewed as a kind of mandala writ small, with layers of meaning that interact with other works of art, all of which is unlocked by tapping into a vast body of earlier literature.

An example of the significance of context, consider the work of the South African journalistic photographer Kevin Carter (and see also Susan Sontag's 2003 essay Regarding the Pain of Others for related discussion with other examples). His most famous photograph (which garnered a Pulitzer Prize and can be easily found on the Internet) sent shockwaves through America in the 1990s. The picture depicts a young child suffering from hunger, and it triggered an emotional response along with heartfelt discussions in society. However, it was the presence of a vulture in the background, looming behind the child, that made this photo truly powerful and controversial. After this photo was published in The New York Times, inquiries from readers who wanted to know about the child's fate, and about how the photo was taken, flooded into the newspaper. The controversy stemmed from the fact that Carter did not appear to have immediately saved the hungry child. Moreover, after his first attempt at photographing the child, he waited nearly 20 minutes for a more dramatic moment to shoot. On the surface, the imagery in this photograph has two sides: it can help 'wake up' the viewer to a crisis - and indeed, it encouraged Western society to recognize an international, humanitarian disaster - but it also raises issues of culpability on the part of the photographer.

However, as discussed below, without further context these two sides alone give us only a superficial understanding of the work enables us to grasp the true intention (beyond the superficial, or even beyond the deceptive) behind some text, image, or language, and it does so through factors such as the surrounding situation, time, environment, culture, etc. Returning now to Carter, the story in the photograph could have been interpreted in a different way if the audience had first known the perilous situation he was in as a wartime photographer. In point of fact, Carter had been intercepted by armed groups and was operating under the threat of violence should he interfere in the situation. These circumstances are important to take into consideration when interpreting his photograph.

Let's take a look at Belgravia series by Karen Knorr, a London-based American artist who delivers stories from a certain era in Britain in photos and text. Belgravia is the name of a rich village in London, England. The reputation of Belgravia in the Middle Ages was classified as a dangerous area due to highway robbery and crimes. However, in the 19th century, it became the richest neighborhood in Central London under the direction of Marquis Richard Grosvenor and architect Thomas Cubittd.

Karen Knorr films London's high society under the title "Belgravia" and delivers a message in parallel with the related text. In particular, he portrays the image of London in the late 1970s and 80s, where a conservative atmosphere prevailed, and a certain class and wealth. In the 1980s, in Britain, there was a special relationship between Margaret Thatcher and Ronald Reagan, allowing the British government to shoot cruise missiles at Russia, and a cultural and political conservative atmosphere has become dominant. Racism was rampant, and economic hardship forced many to suffer from unemployment. At a time when "English nationalism" hit society, which discriminated and attacked Pakistani and Indian immigrants, British society was full of anger and confusion. In this confusion, Knorr captures the characteristics of London's wealth-symbolizing neighborhoods, such as figures, interior decorations and fashion. 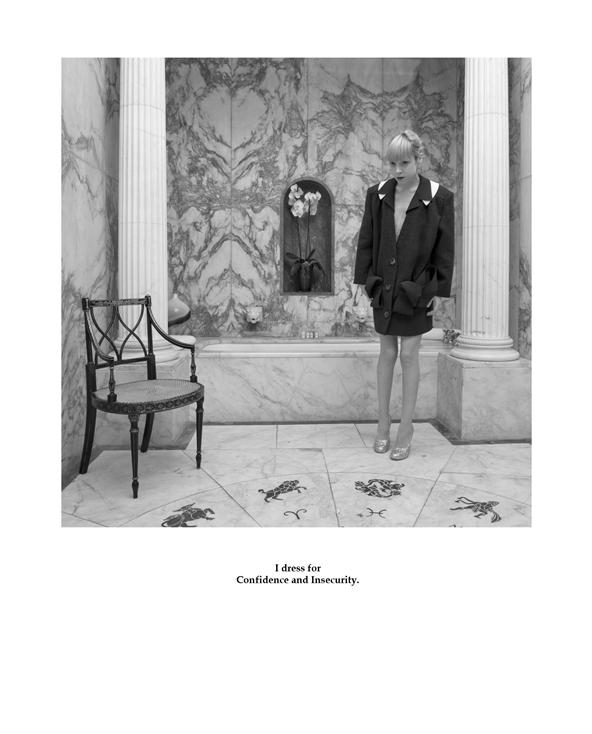 The keywords of the <Belgravia> series will be text and photography, the story of the times (history) and ethnographic approaches. The knowledge required to understand this series is an understanding of the history of a particular era in England, an understanding of ethnography, and the relationship between text and photography(image). Without this understanding, looking at this photographic work could only be seen as a list of models dressed up in retro, black-and-white photographs and significant words. Inspired by conversations with actors in the picture, the artist wrote the text and placed it with the picture, and the text and images exist by complementing each other.

Elements in the picture fill the ‘imagination’ that comes to mind when you encounter a sentence, and sentences fill what you guessed from looking at the picture, and a piece is completed. However, points that limit imagination and present limited interpretations may be perceived as critical aspects. The specific environment and culture that the artist tries to illustrate combine texts and images to exclude the possibility of mistranslation, and through this, various interpretations are lost, but the exact meaning can be conveyed. Once again, identifying the 'context' accompanying to understand visual works does not end in a moment. Understanding the stem of a context does not end at a single point, but draws understanding that multiple stems overlap and overlap.

Everything is a story about yourself and the world.

writers and artists who express themselves in visual language present a view of the world through their own experiences and inspiration. Now, texts and images may appear to represent different mediums, yet texts and visual images may not be so very different after all, in that they are only different in the way they interpret the world. Thus, they both ultimately convey their own perspectives and their own stories. Similarly, when readers read a text, they visualize it through their imagination, which is based on their own perspectives. And spectators too write down their personal reactions to some piece of art. Even if they are not professional critics, through social media, they freely disclose their impressions and interpretations. One's perspective can thus be shared with others at any time via social media applications installed on our smartphones.

"We have to live like we have nothing. We have to live like we know nothing. We must live as if we want nothing…There is happiness being raised in cities, but the happiness that humans really need to pursue is "descending happiness". Unless you are ill and are hospitalised, cannot truly see the lover's true face. If you don't consider the perspective of a prisoner, you can't know the true shape of things."

Perhaps the passage above reflects the perspective of an accomplished, elderly scholar, a perspective that only one who has already achieved many things and has had countless experiences of joy and sorrow in life could express. Living as if you have nothing as if you know nothing, or as if you want nothing, in the end, is contrary to what we think of regarding modern society. Can we live as if we have nothing in a materialistic society that we have lived in for our entire lives? How can we live as if we know nothing when flooded with false news, gossip, and the constant bombardment of information we face every day? And how can we live when confronted with the desire of longing to have someplace in the spectacle of society. Is it possible? "Descending happiness" would mean realizing true happiness and the life of ups and downs that keeps cycling from bottom to top and top to bottom.

The ongoing work of curators and artists, both in their individual writings and in their collaborations, aims to provide insight into the life and the process of expressing one's own philosophy with visual imagery. There are many times when the artist completely jumps into the creation of some artwork, which cannot then be separated from his/her inner self. It is the curator's task, then, to probe for a broader meaning and to relate the story behind the work in a larger context. In this sense, we must think about the process of creation from both the perspective of the artist and with the understanding of the curator as an outsider.