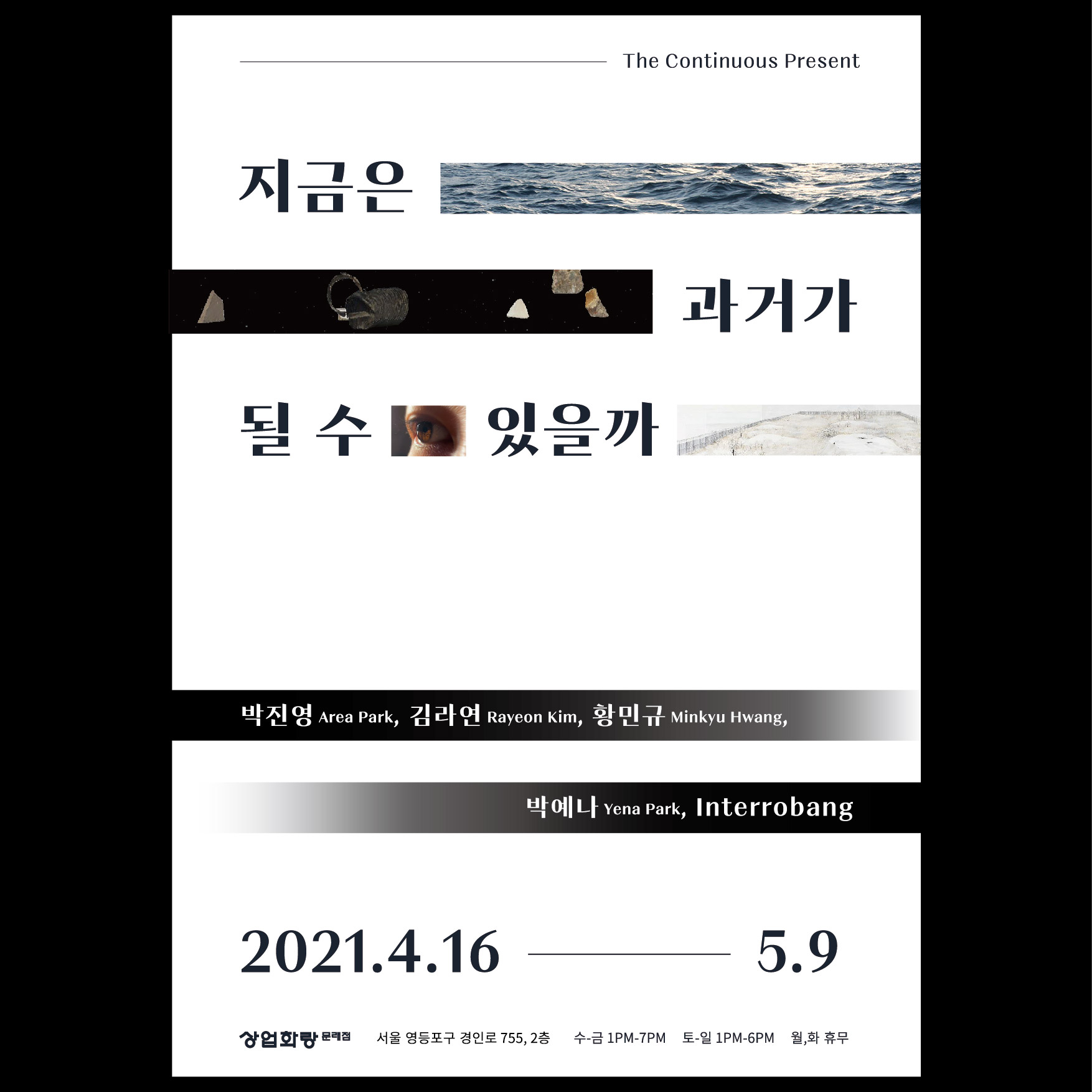 Though we all eagerly wait for now to pass, the reality created by the notorious coronavirus hasn't yet become the past. Even in the case of disasters that happened in the past, we can ignore them as “other’s disasters”, but the scars left behind cannot easily go by. And the COVID-19 pandemic, which no one else can call someone else's disaster, has become a part of our life for everyone to adapt to. Will we be able to overcome the present, and restore the future that resembles the past? Or should we accept that this is a huge turning point that prevents us from going back in time? The confused and undefinable now is barely understood as fragments of untidy words.

The exhibition, which asks questions about the rarely passing “now”, introduces works that cross between disaster and daily sensations, art and web archives. The question, “can now be the past?” has a dual meaning in terms of pandemics and time reorganized by the media.

Today, the chronological time of the past, present and future is intermixed by the media. The reconstruction of time by media is a topic that crosses from early photography to today’s cyberspace. Roland Barthes said the photograph brings "traces of things that once existed" to the present, and described it as "the reality of the past has leaked." Walter Benjamin also saw that when image put past and present side by side, it allows for the perception that “then and now coming in like a flash of lightning.”

When photography deals with disasters, what does it bring up from the ruins of the past to the present? Rather than focusing on recording the most shocking scenes, Area Park's photographs bring back the daily scenes and remnants left after the shocking moments. The March 11 tsunami and the nuclear explosion in Fukushima are one of the events that made the sea clearly recognized as a source of disaster. The <Moving Nuclear> series records the journey of a voyage back to Jeju via the coast of Fukushima in 2013, via Taiwan, the Philippines, Vietnam, Singapore, Indonesia, and the equator, tracking the invisible traces of nuclear pollutants circling the Earth.

The devastation is clearer and easily visible on the ground than in water. Rayeon Kim's paintings, which pays attention to the background of the urban environment, show the "empty landscape," a transitional phenomenon that occurs in the process of repeated redevelopment.

Between old and new landscapes, when forgotten objects of redevelopment sites are neglected and devastated, it mixes with indifferently grown plants and forms new artificial-nature.

The empty landscape resembles today's quiet disaster. A disaster that quietly encroaches on the air we breathe and keeps us going through quarantines and lockdowns. And now virtual space becomes the reality that no one can call a "fake" reality. In Min-Kyu Hwang's mockumentary video, virtual and reality, scenarios and real situations are mixed, and the artist's experience and lines of Japanese animation are naturally mixed. Big and small crises of human beings, and the global pandemic, are once again pursuing the existence of a comic hero in despair and hope.

With the density of offline space loosened by the COVID, the extreme activation of the web is read as a crisis or opportunity of art. Boris Groys identified art on the Internet with art archive, and saw it as the possibility of "remaining as a lasting present and being separated from the context of linear history." Concurrency appears where the present-past gap has disappeared, and on the web, the documentation of the constantly renewing process, rather than a fixed end product, soon becomes an artwork.

The work of Interrobang and Yena Park shows this possibility in different ways. 'Interrobang Project' maximizes the possibility of web archives during disasters. The website (inter-ro-bang.org/)) was created to share interviews with various creators who have faced a crisis in their own way since COVID. At a time when artists' creative opportunities are being delayed, Interrobang finds a way to break through the "?!" of this period by sharing their unfinished work and stories. If Groys’ formula of "Art Archive = Art" can be established in the webspace, it will be the art of today itself to come up with a new way of collecting scattered voices and telling them.

In Yena Park's "Dead Skin Cells of the Earth," the useless pieces of waste in offline-city are revived through 3D scanning instead of disappearing and remain as the web-space wandering object. These waste debris, which can be observed at various angles in a virtual environment, are also materials that will form the land of the new world. The artist, who has explored the possibility of continuous collapse and recurrence of artificial structures, sees the beginning of the future that will come after overcoming the ruined now.

Between disaster and daily life, between the time flowing past-present-to-the-future and the time reorganized by the media as 'sustained present', between the art scene and the online archive, we stand somewhere that is not entirely part of it. In this space, where past and present disasters overlap, and online and offline overlap, we will be able to observe the aspects of the present that will never be defined as one.